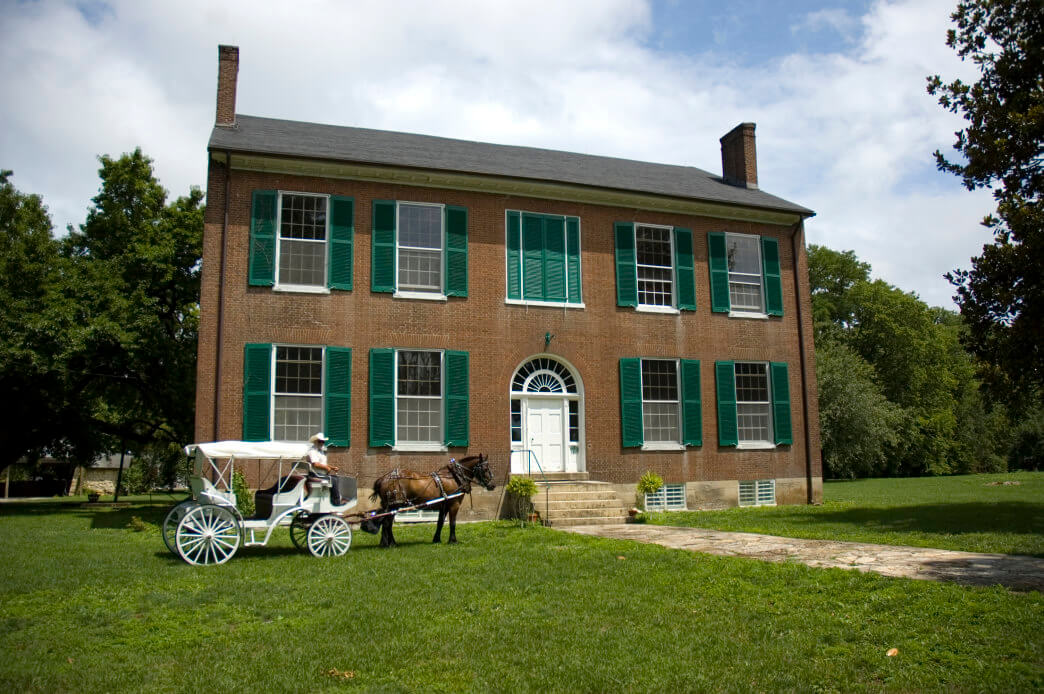 6 Historic (and Spooky) Places to Visit in Bardstown, Kentucky

It’s no secret that Bardstown is The Bourbon Capital of the World®, but did you know that it’s also a treasure trove of haunted history?

As Kentucky’s second-oldest town, Bardstown has been playing host to some truly spooky sites and legendary tales for over 200 years. With haunted mansions, abandoned jailhouses, and everything in between, Bardstown is steeped in history, but not always suited for the faint of heart.

It may be no surprise that beautiful little Bardstown has a wide variety of historic bed and breakfasts to choose from when booking a visit. What may shock some travelers, however, is that one of the town’s most interesting options for lodging is an old jailhouse-turned-bed-and-breakfast called Jailer’s Inn.

Jailer’s Inn is most notorious for having housed some of the scariest criminals in America between 1797 and 1987, when the building served as the town’s jail. It is also well known for having a large number of feisty spirits still lingering about the property today. In fact, so many guests have reported seeing Mrs. McKay—one of the original jailers—that The Travel Channel once named it one of the 10 Most Haunted Places in the United States.

Of course, Jailer’s Inn is also very well known for being one of the most welcoming and hospitable bed and breakfasts in Bardstown today. Visitors can stroll through beautifully landscaped gardens, fill up on delicious southern dining, and enjoy convenient access to everything else Bardstown has to offer.

Right behind Jailer’s Inn is the Old Nelson County Jail. There, you can tour the upstairs dungeon with two small jail cells, best-known for their 30-inch-thick limestone walls. The Nelson County Jail is one of the oldest jail complexes in the state of Kentucky, built in 1819 and used until 1987.

And although it’s out of commission today, its legacy as an eerie addition to Jailer’s Inn remains, as guests and staff alike have reported peculiar encounters with prisoners from the past.

Conveniently located right behind Jailer’s Inn on 4th Street, Pioneer Cemetery (also known as Old Jail Cemetery) is a must-see for people who appreciate haunted landscapes. Stroll through the gravestones and chest tombs to get a feel for this ancient cemetery dating back to the 1700s. It hasn’t been used since the 1850s, but visitors will be glad to know that the grounds have been well kept, resulting in many tombstone inscriptions still being legible today.

BONUS FACT: John Fitch, the inventor of the steamboat, was once buried here, though his remains were later moved.

Thrill-seekers have been coming to Bardstown to check out Old Talbott Tavern since the 1780s. The restaurant-meets-bed-&-breakfast was once the oldest Western stagecoach stop in America, and today lives up to its chilling reputation with every new visitor who passes through its doors.

In practice, the tavern has become a cozy local staple that really typifies classic Southern hospitality and decor. Visitors enjoy quaintly decorated rooms and mouth-watering cuisine, but it’s not uncommon for forks and glasses in the dining room to move on their own. Guests should also try to not be surprised if the piano begins playing unexpectedly or the clocks chime at odd times during the night!

BONUS FACT: Some of the tavern’s most famous patrons include Daniel Boone, Abraham Lincoln, John Fitch, and Jesse James – who is especially notorious for leaving his mark on the pub by shooting at an upstairs mural. You can still see the bullet holes today!

The Civil War Museum and the Women’s Museum of the Civil War is the fourth largest Civil War museum in America and contains authentic memorabilia and historical exhibits from both Union and Confederate forces. Highlights include the flag of legendary Kentuckian John Hunt Morgan, as well as the silver flask of Confederate General John C. Breckinridge.

Known across the globe for getting a shout-out in Stephen Foster’s official song for the state of Kentucky, My Old Kentucky Home also has something of a spooky past. Originally built in 1818 by Judge John Rowan, the spectacular Bluegrass mansion was the unfortunate location of several tragic events throughout the late 1800s. Among those events were the deaths of eight family members and eight slaves all within a 24-hour period due to cholera, and the accidental death of the judge’s son, who fell out of his bedroom window. And although he was an adult with children of his own when he fell, many visitors claim to have seen the ghost of his grieving mother listlessly roaming the halls.

The elaborate, three-story mansion at Wickland, Home of Three Governors is a stunning example of classic southern architecture. With high ceilings, intricate banister work, original wood staircases, and a double parlor for entertaining, the mansion at Wickland is an intimate and fascinating foray into Kentucky’s political heritage

For the ghost-hunter aficionado, try taking the Spirits Tour at Wickland with a professional medium to tune into the ghostly energies surrounding the house. Visitors can even ask questions of the friendlier ghosts, with many having reported previously unconfirmed details about the ghosts’ lives.

(Note: The Spirits Tour is currently unavailable, but keep an eye on the Wickland website for more details on when it’ll be back! And just in case you can’t wait, check out the Bardstown Ghost Trek with Certified Ghost Hunter Patti Starr to get all the ghostly background on Bardstown.)

With all these spooky spots and more, beautiful little Bardstown has the kind of haunting grit that’ll make a believer out of the biggest ghost story skeptic – all you’ve got to do is visit!

Looking for more historical experiences in Bardstown? Get our self-guided map of walking tours here so you don’t miss a thing!

This website uses cookies to improve your experience while you navigate through the website. Out of these cookies, the cookies that are categorized as necessary are stored on your browser as they are essential for the working of basic functionalities of the website. We also use third-party cookies that help us analyze and understand how you use this website. These cookies will be stored in your browser only with your consent. You also have the option to opt-out of these cookies. But opting out of some of these cookies may have an effect on your browsing experience.
Necessary Always Enabled
Necessary cookies are absolutely essential for the website to function properly. This category only includes cookies that ensures basic functionalities and security features of the website. These cookies do not store any personal information.
Non-necessary
Any cookies that may not be particularly necessary for the website to function and is used specifically to collect user personal data via analytics, ads, other embedded contents are termed as non-necessary cookies. It is mandatory to procure user consent prior to running these cookies on your website.
SAVE & ACCEPT
X